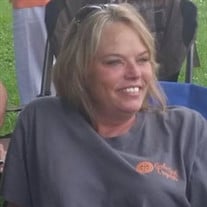 Mrs. Tina Booth age 52 of Water Valley passed away at 3:20 PM Thursday June 10, 2021 at her residence. She was of the Baptist Faith and a machine operator at Barry Global in Fulton. She is survived by her husband; Pete Booth, Father and step... View Obituary & Service Information

The family of Tina Booth created this Life Tributes page to make it easy to share your memories.

Send flowers to the Booth family.