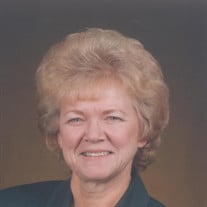 Ruth Ann Turner Hamlin, 80 of South Fulton, TN passed away Friday, January 8, 2021 at her sons residence in Murfreesboro, TN. She was a member of the Clinton First Assembly of God, had retired from H.I.S. and worked at Dana and as a caregiver.... View Obituary & Service Information

The family of Ruth Ann Hamlin created this Life Tributes page to make it easy to share your memories.

Send flowers to the Hamlin family.