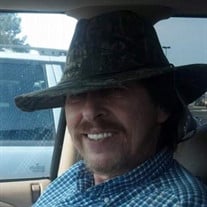 Mr. Royce Don Felts age 65, of Paducah, KY and formerly of Milburn, KY passed away at 10:05 AM Tuesday, December 7th, 2021 at his residence. He was of the Baptist faith and a U.S. Army Veteran Mr. Felts is survived by three sons- Jamie (Penny)... View Obituary & Service Information

The family of Royce Don Felts created this Life Tributes page to make it easy to share your memories.

Send flowers to the Felts family.