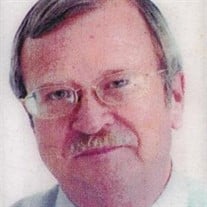 Mr. Ronald Lynn Clark, age 72 of Mayfield, Ky passed away on Tuesday, March 16, 2021 at 3:00 PM at his residence. He was of the Baptist Faith; He worked for the Paducah Sun for 47 years as Sports Writer and City Editor; He received a Bachelor&#8217;s... View Obituary & Service Information

The family of Ronald Lynn Clark created this Life Tributes page to make it easy to share your memories.

Send flowers to the Clark family.