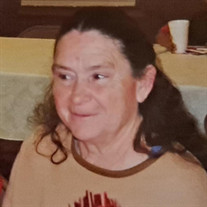 Mrs. Oreen F. Scott, age 79, of Wingo, KY passed away peacefully at 2:14 PM Saturday, February 06, 2021 at Baptist Health Paducah from natural causes. To the surprise of Marion and Effie Stillwell, she and her twin brother Oren were born on a winter day, January 13th, 1942 outside a small coal mining community in Wyoming. While her father maintained the strategic rail lines in southern Wyoming during WWII, she grew up with her sisters and brothers: Joyce, Mary, Marion, Loretta, Oren and Dan. After the war, the family moved into a one bedroom home on land outside Cheyenne. She attended Cheyenne High School. She met and married Clarence "Budd" Scott. While Budd served in the Navy through the Vietnam War, after, and until his retirement, they rotated homes between the coasts, Hawaii, and occasional land locked locations. During this time, she was blessed with a son, Ernie Scott. If you pressed "0" during this time to speak to an operator, there was a chance that she was the voice on the other end of the line. Helping people was her calling. She worked as an operator until her retirement from AT&T. They eventually settled in their home in Wingo, Kentucky. In Wingo she found many friends in the community and at the Wingo Baptist Church. Her friends supported her through the loss of her husband and later aided her in taking care of her son before he passed. Despite a heart that was weakened by a childhood illness, and predictions that she would die young, her inner strength and faith would not let it control her destiny. Her energy and love for her friends and family carried her through a purposed life. Her phone within reach, her car standing by, she was a force for good in the world. She was preceded in death by her husband, Budd, her son, Ernie, and her siblings Oren, Danny, Marion, Mary, Joyce and Loretta. She will be buried next to her husband in Cheyenne, Wyoming. The Schrader, Aragon & Jacoby Funeral Home, 2222 Russell Ave., Cheyenne, WY 82001 is in Charge of arrangements in Cheyenne. The Brown Funeral Home, 1223 West Broadway, Mayfield, KY 42066 is in charge of the local arrangements. Expressions of Sympathy may take the form of contributions to: Mayfield-Graves County Food Pantry, 424 S. 9th St., Mayfield, KY 42066

Mrs. Oreen F. Scott, age 79, of Wingo, KY passed away peacefully at 2:14 PM Saturday, February 06, 2021 at Baptist Health Paducah from natural causes. To the surprise of Marion and Effie Stillwell, she and her twin brother Oren were born on... View Obituary & Service Information

The family of Oreen F. Scott created this Life Tributes page to make it easy to share your memories.

Send flowers to the Scott family.