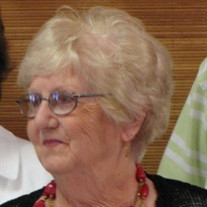 Mary Sue (Gunter) Fowler, age 91, slipped peacefully from her earthly home on Sunday, February 14, 2021. She loved gardening, sewing, art and wearing all her different hats and jewelry. She was the loving mother of seven children, whom she mothered... View Obituary & Service Information

The family of Mary Sue Fowler created this Life Tributes page to make it easy to share your memories.

Send flowers to the Fowler family.