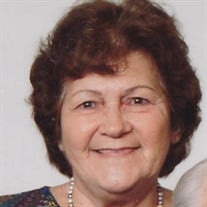 Mrs. Martha G. Brooks, age 82 of the Hickory Community passed away at 8:40 PM on Thursday, February 18, 2021 at the Clinton-Hickman County Nursing Facility in Clinton, Ky. She was a member of the Pottsville Church of Christ. She was a seamstress... View Obituary & Service Information

The family of Martha G. Brooks created this Life Tributes page to make it easy to share your memories.

Send flowers to the Brooks family.