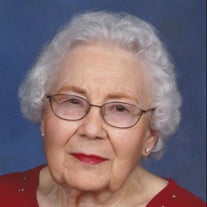 Mrs. Marie Byrn Jarrell Malone, age 100, a resident of Mayfield, passed away at 2:22 P.M. Wednesday, August 4, 2021 at the Jackson Purchase Medical Center in Mayfield. She was retired from Burroughs Corporation in Detroit, MI., and a member... View Obituary & Service Information

The family of Marie Byrn Jarrell Malone created this Life Tributes page to make it easy to share your memories.

Send flowers to the Malone family.