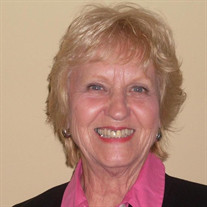 Mrs. Judith “Judy” Roberts Gentry, of Mayfield, KY passed away peacefully on Wednesday, January 20th, 2021 at her home surrounded by her husband, children and grandchildren. Judy was born to the late J. A. “Bob” Roberts and Estelle Nussman Roberts who were the owners of Roberts Funeral Home. She graduated from Mayfield High School and attended Murray State University. She was a longtime member of the First United Methodist Church in Mayfield and was very active in her church. She and her husband, Ron Gentry were the former owners of radio stations WYMC in Mayfield and WGKY in the river counties. Judy owned and operated Polaris Travel where she took numerous university choirs across Europe and various parts of the world. Judy was a member of the Mayfield High School Alumni Committee and loved being a part of the the “Marching 100” Mayfield High School Band during her school days. Judy was an avid gardener and lover of animals and nature. She served her community through various boards and committees. Judy was creative and had a giving spirit. She was a loving wife, mother, sister, grandmother and friend. She is survived by her husband; Ron Gentry, her son; Brian (Melissa) Gentry of Nashville, TN; her daughters; Julie (Chan) Routen of Murray, KY, Jill (Jeremy) Alexander of Henderson, KY. Her grandchildren; Katie (Dan) Dietrich, Graham (Kayla) Gentry, Haley Gentry, Ginny Gentry, Alex Routen, Lucas Routen, Lauren Alexander and Ben Alexander. Great grandchildren; Calvin Dietrich, Jack Dietrich, Jovie Dietrich, Kennedy Gentry and Emily Gentry, her sister; Betty Roberts Shanklin of Lexington, KY, a sister in law; Martha Stanley of Mayfield, KY and several nieces, nephews and cousins that she loved dearly. Judy was preceded in death by her parents. Due to COVID-19, a private graveside service will be held at Highland Park Cemetery. A celebration of life will be held at a later date in the spring for family and friends. Memorial contributions may be sent to First United Methodist Church in Mayfield, Mayfield High School Alumni Scholarship or Mercy Health Hospice. The Brown Funeral Home in Mayfield is in charge of arrangements.

The family of Judith A. "Judy" Gentry created this Life Tributes page to make it easy to share your memories.

Send flowers to the Gentry family.