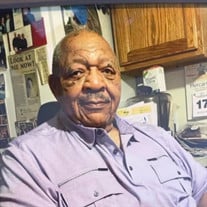 Mr. Jesse Jake Holbrook, Jr age 83 of Grand Rapids, MI passed away Thursday, January 20, 2022 at Mercy Health St. Mary’s in Grand Rapids, MI. He worked for Smith Industries assembling Aviation parts. Jesse was an accomplished musician and loved playing the guitar and harmonica and was of Baptist Faith. He is survived by his two Brothers, Robert Lee (Kathy)Holbrook and Johnny Holbrook both of Flint, MI; 4 Sisters, Mattie (Jessie) Holbrook Patrick of Flint, MI, Lily Holbrook of Flint, MI, Martha Holbrook of Clinton and Rosemary Postma of Las Vegas, NV, and special friend Greg Albrchat of Grand Rapids, MI. Jake embraced his family, especially his nieces and nephews. He loved them so and was a strong presence in their lives. He is preceded in death by his parents, Lizzie and Jesse Holbrook, SR. and 3 sisters, Frances Holbrook, Verma Ross and Alice B. Rice. Funeral Services will be held 1 PM Saturday, January 29, 2022 at the Brown Funeral Home in Clinton with Rev. Eugene McDonald officiating. Burial will follow in the Clinton Cemetery. Visitation will be held after 11 AM on Saturday, January 29, 2022 at the Brown Funeral Home in Clinton.

The family of Jesse Jake Holbrook JR created this Life Tributes page to make it easy to share your memories.

Send flowers to the Holbrook family.