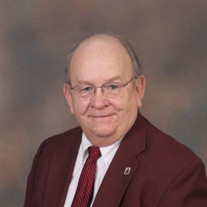 Mr. Jerry Ishmael Steele, age 82, a resident of Mayfield, passed away at 11:30 a.m., Saturday, September 18, 2021, at the Jackson Purchase Medical Center in Mayfield. He was a retired employee of IBEW doing electrical work, was employed at the former Albritton Market, Merit Clothing Company and Rick's Electric in Mayfield. Before he retired from IBEW he worked several electrical projects, including: Kentucky Dam, helping build the generators; Marshall 500 Switch Yard in Calvert City, KY; the industrial park in Hopkinsville, KY, working on the scrap metal conveyor and several other TVA Jobs. Jerry was a member of the Northside Church of Christ and was an elder for 26 years. He preached for churches of Christ for 30 years doing full-time ministry in Kentucky, Tennessee, Mississippi and Illinois. He enjoyed teaching Bible classes and was a faithful servant of the Lord. He worked diligently to defeat the Equal Rights Amendment in the 1970s. He had great concern and knowledge of the country in which we live and was an avid reader. He cherished and loved his family--his wife, son and daughter-in-law, two granddaughters and more recently two grandsons-in-law. He was blessed with a great-grandson and another great-grandchild is on the way. He was thankful for his family. He also enjoyed many family reunions and associations with family and friends. Throughout his illnesses, he maintained a remarkably good attitude. Jerry is survived by his wife, Marilla Clark Steele; one son, Algene and wife Donna Steele of Henderson, TN; two granddaughters, Jessica, with husband Clay Leonard, of Paris, KY, and Anna Catherine, with husband Justin Attkisson, of Nashville, TN; one brother, Jimmy (and wife Yoshiko) of Tacoma, WA; one sister, Sharon Elam of Hickory, KY; and one great-grandson, Amos Leonard. He was preceded in death by his parents; Alvis and Rubye Mae Olive Steele; one sister, Jeraldean Steele; and brother, Lewis Steele. Funeral services will be conducted at 11 a.m., Wednesday, September 22, 2021, at the Northside Church of Christ with Billy Clark, Clay Leonard and Mike Tucker officiating. Serving as pallbearers will be: Justin Attkisson, Shawn Baldwin, Tony Campbell, Tim Clark, Chris Kemp, Benny Waggoner, Kenny Waggoner and Tim Waggoner. The elders of the Northside Church of Christ will serve as honorary pallbearers. Interment will follow in the Macedonia Church of Christ Cemetery. Friends may call from 5 p.m. until 8 p.m., Tuesday, at the Brown Funeral Home in Mayfield and from 9 a.m. until 11 a.m., Wednesday, at the Northside Church of Christ. Memorial contributions may be made to Freed-Hardeman University, 158 East Main Street, Henderson, TN, 38340, or New Pathways for Children, P.O. Box 10, Melber, KY 42069-0010. The Brown Funeral Home in Mayfield is in charge of arrangements. The family of Jerry Steele would like to give a special "Thank You" to the staff at Green Acres Health Care and Jackson Purchase Medical Center for the kind and loving care given to Jerry during his time there. The Steele family requests masks be worn during visitation at the funeral home and during the service at the church.

Mr. Jerry Ishmael Steele, age 82, a resident of Mayfield, passed away at 11:30 a.m., Saturday, September 18, 2021, at the Jackson Purchase Medical Center in Mayfield. He was a retired employee of IBEW doing electrical work, was employed at the... View Obituary & Service Information

The family of Jerry Ishmael Steele created this Life Tributes page to make it easy to share your memories.

Send flowers to the Steele family.