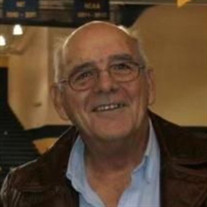 James David Ray, age 74 of Mayfield, Kentucky passed away on December 4, 2021 surrounded by family at Lourdes Hospital, Paducah, Kentucky. David was a member of Sand Hill Baptist church. David retired from the Kentucky Transportation Cabinet in 2002 after 35 years of service working with the Department of Engineers. In retirement, he drove a concrete truck, worked security and drove a truck for local fish hatcheries. All throughout his life he had a strong passion for all types of music and taught the appreciation of music to his children. He was a bass guitarist for several bands for over 40 years. The most special time was when he played with the band Sleepwalk with his son. His other hobbies included service with the Civil Air Patrol and was an enthusiast of Citizen Band radios. Wife – Ann Ray of Mayfield, Ky; Three Children – Missy Cunningham (Chris) of Bowling Green Shane Ray (Teresa) of Pittsboro, IN Matthew Ray (Bri) of Forney, TX Three grandchildren – Alex Chesson (Josh), Jessica Cunningham, Halie Cunningham (Matt) Two great grandchildren – Evie Mae Chesson and Nova Brylee Lawrence Brother – Johnny Ray (Carlyn) Many nieces and nephews. Graveside Services will be held on Thursday, December 9, 2021 at 11:00 AM at the Woodlawn Memorial Gardens Mausoleums with Bro. Ronnie McManus officiating. Friends may call from 5-8 PM on Wednesday, December 8, 2021 at the Brown Funeral Home in Mayfield, Ky. Pallbearers will be: Jeff Henderson, Richard Cook, Kenneth Foy, Tommy Vaughn, Brian Parks, Keith Green, Mark Skinner, and Eric Ray. Luke 16:22 And it came to pass, that the beggar died, and was carried by the angels into Abraham’s bosom.

The family of James David Ray created this Life Tributes page to make it easy to share your memories.

James David Ray, age 74 of Mayfield, Kentucky passed away on...

Send flowers to the Ray family.