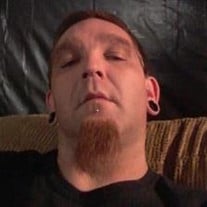 James "Jimmy" William Hutchison, age 35, of Fulton, KY passed away at 9:32 PM Saturday, June 12, 2021 at his residence. Born in Martin, TN, Jimmy worked as a welder most of his adult life. He is survived by his fiancee - Angela "Angie" Baker... View Obituary & Service Information

The family of James William Hutchison created this Life Tributes page to make it easy to share your memories.

Send flowers to the Hutchison family.