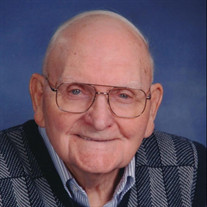 Howard Carneal Stairs entered his heavenly home on Saturday, January 29, 2022. Born in 1922 in Hickman County, as a child he moved to the Holifield area of Graves County and grew up along with his siblings learning farm work from his parents. He placed his faith in Jesus Christ at age 16 and “with the good Lord’s help” faced many uncertainties and enjoyed countless blessings in this life. After starting a family and working in the Civilian Conservation Corps, he was drafted into the Army one year after Pearl Harbor. He served in the 99th Infantry Division in the 393rd Infantry Regiment as a platoon guide in the Battle of the Bulge in Ardennes, Belgium where, after his company sustained heavy losses, he was promoted on the field from private to sergeant. Later, he was wounded by enemy fire at Remagen Bridge in the Battle of Rhineland and, once recovered, he finished his military service assisting in the Allied occupation of Germany. After proudly serving his country and spending some years in California, he returned home to Mayfield where he settled his family and became self-employed as an auto body mechanic. After he sold the business, he decided to go to work for Driver Motors and Dan Gardner Ford. Once retired, he enjoyed being an active member of Wingo Old Cumberland Presbyterian Church, daily Bible reading, taking care of family pets, listening to music, and watching TV. He and his beloved wife shared their modest home in Mayfield for almost five decades until her passing in 2010. Blessed with a strong will and relatively good health up until the past year, he still did a number of household chores and was known to still try to mow his own yard and drive himself on local errands on occasion. He took pleasure in spending time with his family and he always enjoyed a visit from friends as long as it was not too short. Now, he is reunited with so many whom he loved. Mr. Stairs is survived by his daughter- Judith Gale of Queen Creek, Az, daughter- Debra (Dennis) Gardner of Mayfield, Ky; three sons- John Stairs of Mayfield, Ky, son- Randall (Sherri) Stairs of Hickory, Ky, and son- Paul (Karen) Stairs of Mayfield, Ky. He is survived by nine grandchildren: Loretta Waite and Ronnie, Angel, Michael, and Christopher Gale of Arizona, Mickey Gardner of Florida, Zollie Gardner of Ohio, and Jason Wall and Maddox Stairs of Mayfield. He is survived by three great grandchildren: Joseph Grace of Arizona, Justin Grace of Washington State and Asialyn Wall of Mayfield; and by two great-great grandchildren: Wyatt Grace of Washington State and Sadie Grace of Idaho. He was preceded in death by his wife- Frances Stairs; infant son- Terry Lynn Stairs; one sister- Jean Bell Speed; five brothers- Curtis Stairs, Edgar Stairs, Calvin Stairs, Vernon Stairs, and David Stairs; parents- Felix Calvin & Virgie Frazier Stairs. Funeral Services will be held on Saturday, February 5, 2022 at 11:00 AM at the Brown Funeral Home in Mayfield, Ky with Rev. David Gargus officiating. Burial with Military Rites will follow in the Calvary Church Cemetery. Friends may call from 5-8 PM on Friday, February 4, 2022 at the Brown Funeral Home in Mayfield, Ky. Pallbearers will be: Terry Gray, Steve Wright, Mark Wright, Jason Wall, Marsha Millikan, and Billy Durbin. Honorary Pallbearers will be: Eddie Mathis, John Anderson, Keith Green, Neal Durbin, and Ronnie Richard. In lieu of flowers, donations can be made to the Calvary Cemetery, 3133 State Route 58 W, Mayfield, Ky 42066 or to the St. Jude Children’s Hospital, 501 St. Jude Place, Memphis, Tn 38105.

Howard Carneal Stairs entered his heavenly home on Saturday, January 29, 2022. Born in 1922 in Hickman County, as a child he moved to the Holifield area of Graves County and grew up along with his siblings learning farm work from his parents.... View Obituary & Service Information

The family of Howard Carneal Stairs created this Life Tributes page to make it easy to share your memories.

Send flowers to the Stairs family.