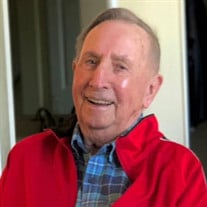 Henry Harvey Hurd was born in Clinton, Kentucky, on October 25, 1925, and passed peacefully on February 26, 2022, in Murray, Kentucky. Beloved by many, Harvey embodied warmth, charm, charisma, kindness, and humor, among many other wonderful traits. Married to Margaret Kimbell Hurd for 62 years, until her passing in 2009, Harvey was a family man to his core. He served as a Marine in WWII and also as a personal orderly to Admiral Chester W. Nimitz. Harvey later served as a personal orderly to Admiral Raymond A. Spruance. Throughout his life, Harvey made friends everywhere he went, notably at Hickory Woods Senior Living, where he moved in 2018 after selling his cherished farm in Murray. He lit up a room with his broad smile and constantly made others laugh with his clever, gentle teasing. He was independent-minded, loved to “hug the necks” of the ones he adored, and knew how to make every person who crossed his path feel special. He loved a good fish fry, a comfortable recliner, Louisville basketball, home-cooked meals, freshly baked cookies, and ribbing his son-in-law, Dave Winslow. He had a special knack for unique and colorful turns of phrase, enough to fill a family keepsake book. His grandsons will always remember his insistence that they wash their hands and turn off the lights. Harvey was loved and cared for the last four years by the wonderful staff and his friends at Hickory Woods and especially by his only daughter, Rita, the apple of his eye. In his final days, Anna Mae Owen Residential Hospice House provided tender comfort. In addition to Rita Winslow (Dave), Harvey is survived by grandsons Darran Winslow (Alexa) and Brian Winslow, and his companion of 13 years, Martha McKnight. The first visitation will be from 4-7pm on Friday, March 4, 2022, at First Murray United Methodist Church. A second visitation will take place from 11am to 1pm on Saturday, March 5, 2022, at the Brown Funeral Home in Clinton, Kentucky, followed by a funeral at 1pm with Rev. Jim Stahler officiating. Burial and Military Rites by American Legion Post 73 will follow in the Clinton Cemetery. In lieu of flowers, donations may be made to: Anna Mae Owen Residential Hospice House, 803 Poplar Street, Murray, KY 42071or American Legion Post 73, 310 Bee Creek Drive, Murray, KY 42071.

Henry Harvey Hurd was born in Clinton, Kentucky, on October 25, 1925, and passed peacefully on February 26, 2022, in Murray, Kentucky. Beloved by many, Harvey embodied warmth, charm, charisma, kindness, and humor, among many other wonderful... View Obituary & Service Information

The family of Harvey Hurd, Jr. created this Life Tributes page to make it easy to share your memories.

Henry Harvey Hurd was born in Clinton, Kentucky, on October 25,...