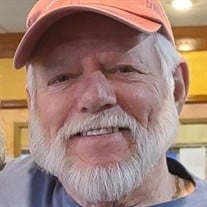 Gary Leon Long age 74 of Sedalia, KY passed away on Wednesday, February 2, 2022 at the Vanderbilt Medical Center in Nashville, TN. Gary was born November 9, 1947 in Reyno, Arkansas to James and Arline Luttrell Long. He grew up in Arkansas and attended the Biggers-Reyno schools. He and his mother moved to Rockford, Illinois where he lived until 1984. During this time he was employed with Borg-Warner Rockford Clutch. In 1969, he was married to Alice J Shelby and two children were born from this union. A son, Jeffrey and a daughter, Angela. In 1984, he and his family moved to Lake of the Ozarks and lived there until 1987 and from there he moved to Illinois. Looking for work landed him in the Mayfield, KY area. He worked many years for Mayfield Machine and Tool before working for the Graves County School District driving a school bus from where he eventually retired. Gary loved life to the fullest and never knew a stranger. When he loved, he loved with his whole heart and he loved making memories with his kids and grandkids. He loved riding his Harley Davidson motorcycle with his life partner, Dorothy Morris; his son, Jeff Long, and his Harley Davidson Brothers and Sisters. He is preceded in death by his parents, James Long and Arline Long Arnold. . He is survived by two children; Jeff L. Long of Metropolis, Il and Angela D. and husband, Stuart Fairchild of Eldon, MO. One grandson, Wesley A. and wife Ashley Honeycutt of Jefferson City, MO and two great granddaughters, Paisley and Sylvia Honeycutt and long time life partner, Dorothy Morris. He will be missed greatly by his family and his many wonderful friends. Visitation will be on Thursday, Feb 10, 2022 from 5pm to 8pm at the Brown Funeral Home in Mayfield, KY.

Gary Leon Long age 74 of Sedalia, KY passed away on Wednesday, February 2, 2022 at the Vanderbilt Medical Center in Nashville, TN. Gary was born November 9, 1947 in Reyno, Arkansas to James and Arline Luttrell Long. He grew up in Arkansas... View Obituary & Service Information

The family of Gary Long created this Life Tributes page to make it easy to share your memories.

Send flowers to the Long family.