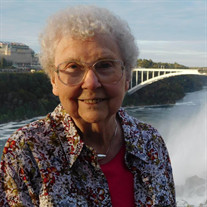 Frances Craddock, at 97 years of age, passed peacefully into eternal life with her Heavenly Father on Saturday April 16th at the home of her daughter in Princeton, Ky. Born in Clinton, KY on January 13, 1925, Frances Mai Brazzell was the daughter of Henry Franklin Brazzell and Maggie Bugg Brazzell. She grew up in Clinton, KY where she graduated from Central High School in 1942. After high school she began working for the Hickman Co. Court Clerk’s office and later at First National Bank. On January 16, 1947, Frances married John Wesley Craddock of Clinton. They lived in Hickman, KY for a few years before returning to her home town that she dearly loved. She was out of the work force for a few years; then life led her back to the Hickman Co. Court Clerk where she served as a deputy clerk for almost 20 years. Later Frances would work for Montgomery Ford car dealership. Frances was a lifelong member of First United Methodist Church in Clinton, serving in various capacities most importantly a prayer warrior. She was a basketball fan from her high school years and became an avid “Big Blue” fan going to games whenever she could. Frances also enjoyed genealogy, playing card games, working crossword puzzles, and going on yearly trips with her daughter and nieces. Frances is survived by her daughter, Elaine Overhults (Doug) of Princeton, KY; several nieces and nephews whom she loved dearly; and many loving friends. She was preceded in death by her husband, John, of 52 years; a grandson, Wesley Daniel Overhults; 3 brothers, Henry A., J. R., and Ellwood; a sister, Orine Jordan; and an infant sister. Funeral Service will be held on Thursday, April 21st at 2:00 p.m. at First United Methodist Church of Clinton with Rev. Tim Escue and Rev. Aaron Dowdy officiating. Visitation will be from 12p.m. until the time of the funeral. Burial will be in the Clinton Cemetery. Brown Funeral Home in Clinton are in charge of the services. In lieu of flowers donations to the First United Methodist Church, 210 South Washington, Clinton, Ky 42031, will be appreciated.

Frances Craddock, at 97 years of age, passed peacefully into eternal life with her Heavenly Father on Saturday April 16th at the home of her daughter in Princeton, Ky. Born in Clinton, KY on January 13, 1925, Frances Mai Brazzell... View Obituary & Service Information

The family of Frances Craddock created this Life Tributes page to make it easy to share your memories.

Frances Craddock, at 97 years of age, passed peacefully into...

Send flowers to the Craddock family.