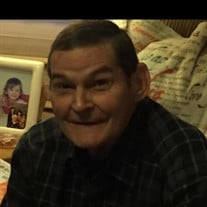 Mr. David Lynn Rohrer, age 70, a resident of Wingo, passed away at 9:20 P.M. Friday, August 6, 2021 at the Clinton ICF Nursing Home in Clinton. He was a United States Army Veteran. He is survived by one daughter: Danean (Eddy) Newton, Wingo,... View Obituary & Service Information

The family of David Lynn Rohrer created this Life Tributes page to make it easy to share your memories.

Send flowers to the Rohrer family.