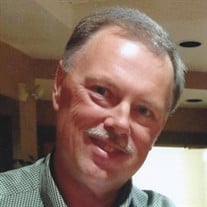 Mr. Roanld Craig Lee, age 56, of Milburn, KY passed away at 2:33 PM Wednesday, December 22, 2021, at Mercy Health Lourdes in Paducah, KY. Craig was a member of the Pryorsburg Independent Bible Methodist Church, he formerly worked as a tire builder at the former Goodyear Tire and Rubber Company in Union City, Tn and most recently at the Phillips Service Company in Calvert City until his health forced him into retirement. Craig was a huge fan of NASCAR and particularly the late Dale Earnhardt. Craig was also an avid fan and supporter of his Tennesse Titans, Survivors include his wife - Angela Lee of Milburn, KY, a daughter - Hannah Shea Lee of Milburn, KY; a son - Noah (Kennadee Ort) Lee of Bardwell, KY; the light of his life his granddaughter - Madison Shea Quimby of Milburn, KY; sister - Gina (Richard) Crider of Fancy Farm, KY and a brother - Brian (Kelly) Lee of Wingo, KY. Craig was preceded in death by his parents - Larry & Judy (Shupe) Lee. Funeral services for Craig will be held at 10:30 AM on Tuesday, December 28, 2021, at the Brown Funeral Home in Mayfield, KY. Rev. Mickey Fowler will officiate with burial to follow in the Shiloh Missionary Baptist Church Cemetery in Carlisle County. Friends are invited to call between 5:00 PM and 8:00 PM on Monday, December 27, 2021, at the Brown Funeral Home in Mayfield, KY.

The family of Craig Lee created this Life Tributes page to make it easy to share your memories.

Send flowers to the Lee family.