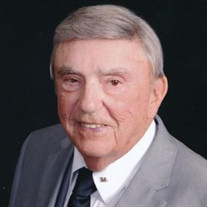 Brother Carl T. McNeill passed away on Wednesday, March 31, 2021 at 9:40 PM at his residence. Brother McNeill was carried by an angel to be home with the Lord. He was born on January 10, 1935 to Carl D. McNeill and Ludie Belle (Hicks) McNeill. He graduated from Symsonia High School in the class of 1953. He was a FFA State Officer and first in Graves County to receive the American Farmers Degree awarded in Kansas City, MO. He was President of the FFA Chapter. His desire was to be a farmer, but God had other plans for this young man. After surrendering to the ministry, he was ordained at Trace Creek Baptist Church at age 21. The first Church he pastored was New Providence Baptist Church in Providence, KY. Brother Carl attended Bethel College in Hopkinsville, and then transferred to Union University in Jackson, TN. He graduated from Union University in 1960 with a B.S. degree. In the same year he was called to pastor Lavinia Baptist Church in Lavinia, TN. Brother McNeill then enrolled in Southern Seminary and graduated with a Master’s Degree in Theology. He pastored Calvary Baptist Church in Parsons, TN, and then First Baptist Church in Hopkinsville, KY. In his mid-thirties, he returned to pastor Calvary Baptist Church in Parsons, TN. During this time, he also preached in the Crusaders of America in New York. In 1976 he pastored at New Prospect Baptist Church in Hookers Bend, TN. While pastoring at new Prospect, he was contacted to see if he could also preach at First Baptist Church in Saltillo, TN. He accepted the Church and pastored both Churches. On Sundays he preached at New Prospect at 9:00 AM and then at Saltillo at 11:00 AM. On Sunday night he returned to New Prospect and preached at 5:30 PM and then preached at Saltillo at 7:00 PM. He pastored both Churches for two years, but remained pastor of Saltillo Baptist Church until 1985. Brother Carl worked at HUD, U.S. Department of Housing and Urban Development, in Nashville, TN and was a Tennessee Colonel and HUD employee of the year. During his time with HUD, he supplied at various churches in Franklin, TN. When he retired from HUD, he moved back to his family farm in Mayfield, KY. At age 78 he came out of retirement to be Associate Pastor of Vanzora Baptist Church. In 2016, he supplied at Oak Grove Baptist Church and one month later became Interim Pastor. Six months later he accepted the Church as full-time pastor. He pastored Oak Grove until May of 2019 when he resigned due to health issues. Brother McNeill is survived by his wife, Francette Thompson Whitt-McNeill, one son, Tommy McNeill, daughter, Elizabeth McNeill Hill and husband Paul, daughter, Beverly McNeill Jackson and husband John, granddaughter, Jessica McNeill Sexton and husband Kevin, granddaughter, Kadi McNeill Marr and husband Landon, and grandson, Gabe McNeill Aydelott. He is also survived by two great grandsons, Liam Marr and Mason Sexton. He was preceded in death by his parents, his first wife Edna Earle Adams McNeill, and his daughter, Jan McNeill Picard. Visitation for Brother McNeill will be Friday, April 2, starting at 5:00 PM at the Brown Funeral Home in Mayfield, KY. Funeral services will be at 1:00 PM at the Brown Funeral Home on Saturday, April 3, with Brother Randy McClure officiating. The Funeral service will be followed by a private burial service at Mayfield Memory gardens. The family wishes to express thanks to Dr. Ryan Frazine and staff, Dr. Spicer and staff, Dr. Concepcion and staff, Jackson Purchase Medical Center, and Caregivers, Elizabeth palmer and Deana Rogers. In lieu of flowers, donations may be made to Oak Grove Baptist Church in care of Alice Massey, 2137 Van Dyke Rd., Paris, TN 38242. Due to Covid-19, the family requests that all visitors wear face masks to the visitation and funeral. Brown Funeral Home in Mayfield, KY is in charge of the arrangements.

Brother Carl T. McNeill passed away on Wednesday, March 31, 2021 at 9:40 PM at his residence. Brother McNeill was carried by an angel to be home with the Lord. He was born on January 10, 1935 to Carl D. McNeill and Ludie Belle (Hicks) McNeill.... View Obituary & Service Information

The family of Bro. Carl T. McNeill created this Life Tributes page to make it easy to share your memories.

Send flowers to the McNeill family.