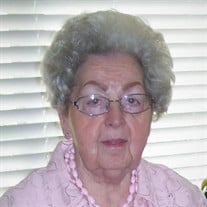 Brownie Joyce Burkett, 96, of Albuquerque, NM was sweetly and calmly swept into the arms of her Lord and Savior Jesus Christ at 10:43 pm Monday, November 8, 2021 at the University of New Mexico Hospital. An accomplished musician playing piano, organ, accordion, marimba, and vibraphone; music played a focal and vital role in Brownie’s life. She played professionally with her younger sister, Janice, as the Tone-ettes on their weekly radio show WFUL Fulton and also appeared on a weekly variety TV show on WPSD Paducah. She also taught piano and organ and served as organist and/or choir director for the various churches she attended, most recently Los Altos Church of the Nazarene in Albuquerque. A devout Christian she was known as a prayer warrior and was sought out for her wisdom and intercessions. Brownie also had extensive experience in accounting and worked as an executive secretary for Tom Black of Tom’s Potato Chips in Knoxville, TN and for an engineering group at Harris Corporation in Melbourne, FL. Brownie was predeceased by her husband of 58 years, Dennis Burkett in 2002, her father, J. C. Walker, and mother, Lennie Nicholas Walker. She is survived by her son, Dr. Brent Burkett and wife, Pamela of Albuquerque; her grandson, Dennis Burkett and wife, Kendri of Olathe, KS; granddaughter, Mary Cline and husband, Jarrod of Albuquerque; half-sister, Janice Whitlock and husband, Mickie of Paducah, KY; half-brother, Larry Walker and wife, Phyllis of Cayce, KY. She doted on 4 great grandchildren, Sophia and Samuel Burkett and Caleb and Gabrielle Cline as well as numerous nieces and nephews. A Celebration of Life is planned for Brownie on Monday, April 18th at the Brown Funeral Home, Clinton, KY with visitation at 9 a.m. and service at 10 a.m. Graveside service and internment will follow at the Salem Cemetery on Hwy 307 north of Fulgham, KY. Expressions of sympathy may be made in Brownie’s memory to Samaritan’s Purse.

Brownie Joyce Burkett, 96, of Albuquerque, NM was sweetly and calmly swept into the arms of her Lord and Savior Jesus Christ at 10:43 pm Monday, November 8, 2021 at the University of New Mexico Hospital. An accomplished musician playing piano,... View Obituary & Service Information

The family of Brownie Joyce Burkett created this Life Tributes page to make it easy to share your memories.

Brownie Joyce Burkett, 96, of Albuquerque, NM was sweetly and...

Send flowers to the Burkett family.